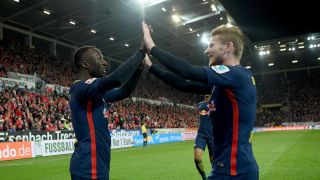 RB Leipzig have made it clear they have no intention of selling players such as Naby Keita, Timo Werner and Emil Forsberg amid ongoing speculation Liverpool are keeping tabs on the trio.

Leipzig enjoyed a successful debut Bundesliga campaign, finishing second to qualify for the Champions League and their fine performances have not gone unnoticed elsewhere.

Werner, who scored 21 top-flight goals this season, recently stated that he is keen to stay at the club, while Forsberg signed a new contract until June 2022 in February.

"We have decided that we will not sell any player from our starting line-up," Mintzlaff was quoted as saying by The Times.

"[Sporting director] Ralf Rangnick told this to our team at the end of the season.

"We will keep our team together and keep on developing."