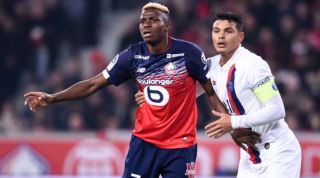 Osimhen has grabbed this season by the scruff of the neck and is emerging as one of Ligue 1's big prospects.

The 21-year-old has scored 15 goals and assisted a further five in all competitions this season.

The Nigeria international moved to Lille in summer for £19m and has started life in France at some rate of knots.

According to Le10Sport, La Liga giants Barcelona and Real Madrid are interested in signing Osimhen in the summer.

The Spanish pair are reported to have made contact with Lille in January over a possible deal.

Both Real Madrid and Barcelona are on the hunt for a new centre-forward as Karim Benzema and Luis Suarez enter the twilight of their careers.

However, the Frenchman is 32 years old and is widely believed to be edging toward the end of his time as Real Madrid's focal point.

It was thought that Luka Jovic would take Benzema's place this season, but the Serbian has struggled to make an impact at the Bernabeu.

For La Blaugrana, Suarez is currently sidelined with a serious injury and the club are planning to replace the 33-year-old in the summer.

It was expected that Barcelona would look to add a number nine in January but no striker came in.

It's reported that Lauturo Martinez is Barcelona's main target, but there are concerns over the cost of such a move.

Osimhen is an option for both clubs and it's said that the amounts, in terms of transfer fees, being negotiated between all parties are already high.