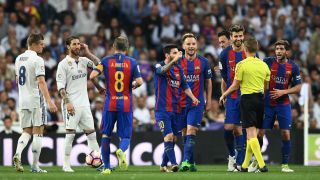 Barcelona have a chance to strike a potentially decisive blow in the title race when they travel to face bitter rivals Real Madrid in the first LaLiga Clasico of the season on Saturday.

Ernesto Valverde's men have established a six-point lead over Atletico Madrid at the top of the table and are 11 better off than Madrid having played a game more. The champions will see this is a great opportunity to turn the tables.

Zinedine Zidane led Madrid to LaLiga and Champions League titles last season and he will not want to give up either of those crowns without a massive fight.

But how will Saturday's Clasico play out? Two of our writers, Ryan Benson and Jamie Smith , debate some of the key issues going into this titanic tussle.

Valverde: "It will be difficult for to be fit for the Clásico. We are not here to take risks and we have to be sure. He's fine but we have to be cautious" November 28, 2017

RB:  Although there is certainly a case for either argument here, it is impossible to get away from one fact; there's no club on earth that wouldn't miss Neymar. Of course, Barca have been excellent so far this season, with Lionel Messi upping his level yet again, but beyond him they have been somewhat unspectacular. Injuries have hampered Luis Suarez, Gerard Deulofeu simply isn't good enough and Ousmane Dembele has been unable to have an impact because of his ruptured hamstring. Granted, Barca's Messi dependency hasn't bitten them on the backside yet and a serious injury to him remains entirely hypothetical, but imagine the impact of losing him for a month or more. With Neymar in that scenario, they would still have a creative genius in attack. Without him, they've no contingency plan. Besides, you can never have too many brilliant players.

JS: The league table suggests not, although Barca's strong position is probably more down to Madrid's struggles and the excellence of Messi. Valverde has also been robbed of the services of Barca's record signing, Dembele, who has played only two league games   due to a hamstring injury. Dembele was supposed to provide the star power in Neymar's absence but perhaps the team simply functions better without the Brazilian. Neymar's individual brilliance was never in question, but he made no secret of his desire to win the Ballon d'Or. There may have been some occasional selfishness in his game as a result of that - as his penalty rows with Edinson Cavani demonstrate - although he fitted in as the perfect third member of the strikeforce alongside Messi and Suarez. Without Neymar, Barca have resorted to an over-reliance on Messi but when you have the best player in football history in your team, why wouldn't you? Barca are just fine without Neymar for now, although when he goes to Madrid in a couple of years the question might have a different answer...

Is Sergio Ramos an inspiration or a liability?

RB:  How someone who routinely scores vital goals and puts his body on the line for the cause can be regarded as a liability is a mystery. Yes, in the heat of the moment that passion can occasionally get the better of him, as his history of red cards suggests. But that's just one element of his game and part of the wider package which makes him such an important player. On his day, there's arguably no finer centre-back in world football and he's one who fights to the last minute. His habit of scoring late goals is no fluke, merely a reflection of his determination to succeed. He may be flawed, but a liability? No chance.

JS:  Liability is perhaps too strong a word, but there is no doubt Ramos puts his team in trouble more often than he should as he simply cannot control his temper. There have been far too many silly red cards in Ramos' career for it to be accidental and the argument that aggression is needed in his game for him to defend so well and be a threat from set-pieces simply does not wash. Barcelona will be fully aware that Ramos can be riled and it would be no surprise whatsoever to see him sent off on Saturday - he must be due one since he hasn't been dismissed since... oh yes, at the start of the month.

Is the BBC over as a collective?

RB:  The BBC will rise again and defy the doubters, mark these words. It's so easy to write them off when things aren't going so well, but given their collective quality, claiming that they're done or finished is foolish. Although Cristiano Ronaldo hasn't perhaps hit his usual heights in terms of goals in LaLiga this season, his performances have remained at a high level and he continues to shine in the Champions League. Karim Benzema is also still having a decent impact on Real's all-round play, even if he's not scoring much, but there's no reason to think he can't recover his goal-scoring touch. The biggest question mark probably hangs over Gareth Bale after a torrid time with injuries over the last year or so, but when he has been fit this season, he's shown plenty to suggest that he's far from done. Five assists and four goals in 12 appearances isn't a bad record for someone enduring as difficult a season as Bale.

JS:  It was intriguing that Ronaldo himself said recently that he hopes the BBC can play together on a regular basis. Despite rumours of a rift between himself and Bale, it is clear even an ego as large as Ronaldo's can recognise the importance of the work done by his attacking colleagues. But while Ronaldo will almost certainly see out the rest of his career in the Spanish capital, the same cannot be said for Bale and Benzema. Stories linking Bale with a move away come up just as often as speculation Madrid will sign a new superstar striker. After missing out on Kylian Mbappe to Paris Saint-Germain, Inter captain and talisman Mauro Icardi is the new name in the frame. Bale will surely go back to the Premier League sooner rather than later and if Icardi arrives either in January or at the end of the season - as is strongly suggested - Benzema will be shunted down the pecking order. This looks set to be BBC's last season together, but they could well go out on a high with a third straight Champions League title.

Click the link to WATCH all the goals from our Spanish Super Cup victory over Barcelona!   August 17, 2017

Is title race over if Barca win?

RB:  Real slipped 10 points behind Barca in November, a gap from which no club has ever recovered from and gone on to win LaLiga in the competition's history. However, no club had retained their Champions League crown before last season. Records are simply things Madrid haven't done yet. There's no escaping the fact that Barca's lead looks pretty emphatic ahead of El Clasico, but who's to say they won't endure an injury crisis, or that the BBC won't rediscover their best and outdo Barca. You never know, Barca could simply suffer a loss of form like Real's earlier in the season. It's not over until the fat lady sings, and she's not even been cast yet.

JS : Some would argue it is already over! Madrid's weirdly flat start to the season has handed Barcelona an advantage that is likely to be unassailable. But stranger things have certainly happened - and not just in Hawkins, Indiana. Madrid's issues in the first half of the season are unlikely to be repeated and victory over Barca in El Clasico could be a pivotal moment in the campaign. That said, if Barca can win at the Bernabeu it would be a gigantic ask for Madrid to come back. Barcelona would have the title in their hands and would have to suffer a catastrophic loss of form in order for Madrid to catch them. But the top of LaLiga is more competitive than it has been for a few years, with Atletico Madrid still unbeaten   and Valencia finally returning to the big-time. Even if Barca walk away with the title, there will be plenty of stories to watch in Spain for the rest of the season.