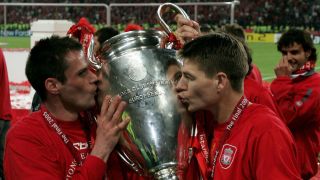 No two finalists have ever met with more European Cup or Champions League titles between them.

The collective weight of history will tip the scales at 17 on Saturday in Kiev. Real Madrid with 12, Liverpool with five.

But deeds past rarely seem to rest heavily on shoulders decked out in famous white or red; they simply propel the current incumbents forward towards glory.

Sometimes all it needs is a mention of a place or a name for fans of all generations to swap fervent stories of nights experienced on location or from afar, read about in books or watched on YouTube. Alan Kennedy, Bruce Grobbelaar or Istanbul; Alfredo Di Stefano, Predrag Mijatovic or Hampden Park.

This weekend, there is not only a trophy to be won. There is a legend to embellish.

Zinedine Zidane's Madrid are chasing a third consecutive Champions League title and a fourth in five years when they take on Liverpool.

It is a run unprecedented in the modern era and one that harks back to a time when the team from Spain's capital established themselves as Europe's first true super club.

The first five editions of the European Cup, from 1955-56 through to 1959-60, ended with the trophy at the Santiago Bernabeu. Di Stefano, Ferenc Puskas, Raymond Kopa, Paco Gento and the rest were Galacticos almost half a century before the term was coined.

Di Stefano netted a hat-trick and Puskas four in a 7-3 defeat of Eintracht Frankfurt in Glasgow in 1960 that remains widely regarded as one of the greatest matches of all time and a high-water mark of a dynasty.

Madrid lifted the trophy only twice more before the turn of the millennium but those early heroics laid solid foundations for the current generation's piece of history. A 10th title – La Decima – came in 2014, preceding the Zidane run.

The second-most prolific team in the history of the competition are AC Milan with seven titles. Up next are Bayern Munich, Barcelona and a club from north-west England.

From Paris down to Turkey…

Glory in the tournament they once dominated eluded Madrid in the 1970s as new powers established themselves. Three consecutive triumphs for the beguiling Ajax of Johan Cruyff were followed by Franz Beckenbauer and Bayern Munich racking up a treble of their own.

Liverpool's third came in 1981, with Kennedy sinking Madrid 1-0 in Paris before – in another fixture echoed this season – Grobbelaar's spaghetti legs did for Roma in 1984. The senseless horror of the Heysel disaster meant the era ended in tragedy 12 months later.

Modern triumphs propelled by the past

When Steven Gerrard lit the fuse on that unforgettable night of escapology against Milan in Istanbul in 2005, Liverpool had not been champions of England for 15 years.

Today marks 10 years since dramatically defeated AC Milan on penalties in Istanbul to lift a fifth European Cup. 25 May 2015

Nor have they been since, and Jurgen Klopp's team finished 25 points behind Premier League winners Manchester City this time around. That's the same Manchester City they decimated 5-1 on aggregate in April's Champions League quarter-final.

Madrid's European resurgence over the past five years has punctuated Barcelona's domestic dominance.

Juventus have won seven straight Scudetti in Italy and Bayern six consecutive Bundesliga titles in Germany. Madrid were wretched for long periods of their quarter and semi-finals against these fellow heavyweights but, by hook or by crook, found a way to win.

"What happened to Barcelona wasn't going to happen to us because we're Real Madrid," said full-back Marcelo, goading a team his own would finish 17 points behind in LaLiga. Roma came back to beat Barca sensationally and Madrid were similarly inept from a position of strength against Juve. But they prevailed.

Zidane's coterie of elite players attuned to the big moments and Klopp's maniacally intense Reds, spearheaded by the effervescent Mohamed Salah, do much to explain the identity of this season's finalists.

But there is something else, something intangible - one of those inexplicable things that makes sport feel vaguely magical. A history to which few involved on either side have any direct link acts as a powerful motivating factor for Madrid and Liverpool.

Both were once the best team in Europe. It is very hard to make that case for either as third in Spain faces fourth in England. But Saturday's winners get to be part of the legend, the next chapter of a story that sustains both clubs.