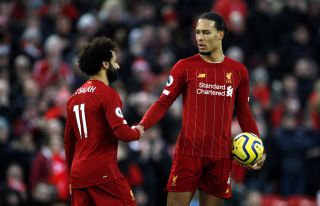 Liverpool opened up a record lead of 22 points at the top of the Premier League this weekend and remain on course for the earliest ever coronation as champions.

Even if nearest challengers Manchester City win all 13 of their remaining games, the Reds will require only six more victories to clinch the title.

And if the two teams keep up their current point averages, the Reds would clinch the trophy at the home of rivals Everton on March 16 one game before then.

Liverpool have taken 100 points from the last 102 available, including their nine successive wins to finish last season.

They came up a point short of the title on that occasion but their unprecedented 2.92 points per game this term has them on course to win the title with eight games to spare.

City – who share the record for the earliest title with Manchester United’s 2000-01 side, after winning the 2017-18 crown with five games to go – average 2.04 points per game this season.

That is a strong record in its own right but pales into insignificance compared to their relentless rivals. City can only reach 90 points at most and, with Liverpool already on 73 after 25 games, extending their winning run by beating Norwich, West Ham, Watford, Bournemouth, Everton and Crystal Palace will take them out of reach no matter what anybody else does in the meantime.

They would then have the chance to celebrate in style. Their unbeaten run is currently 43 league games, and would reach 49 in that instance to match Arsenal’s record set from May 2003 to October 2004 – with City to follow in the next game as they bid to set a new record.

City’s winning margin of 19 points in that historic 2017-18 campaign is also a record but Liverpool already lead by more than that, and will fancy breaking their 100-point record as well.

Where is your team in the #PL table? pic.twitter.com/WDaCCNXMzp— Premier League (@premierleague) February 3, 2020

Liverpool’s 22-point cushion is almost 50 per cent more than the league’s previous dominant champions have enjoyed at this stage of the season.

City’s centurions were 15 points clear after 25 games, a margin that never dipped below 13 and ended up as a record 19.

That beat United’s previous mark of 18 in 1999-2000, when they led by only six at this stage and did not hit double figures until their 31st games. They led by 13 for much of the run-in before a final flourish.

The record-setting 2000-01 win saw them lead Arsenal and Liverpool by 15 at this stage, a margin that peaked at 16 with five games left before they finished 10 clear.

Arsenal’s ‘Invincibles’ of 2003-04 only re-took top spot in the table by winning game 22 of their season and led by five at this stage, though they won the title with four games to spare and by an eventual 11-point margin.