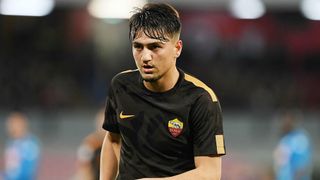 Cengiz Under feels refereeing decisions robbed Roma of a place in the Champions League final.

Liverpool take on reigning champions Real Madrid in Kiev on Saturday after coming through a remarkable semi-final against the Serie A side that finished 7-6 on aggregate.

Jurgen Klopp's men prevailed 5-2 at Anfield, having raced into a 5-0 lead, while a pair of late goals gave Roma a 4-2 win at the Stadio Olimpico in an eventful return fixture.

Roma sporting director Monchi called for VAR to be introduced in Champions League matches in the aftermath of a second leg where his club had two penalty claims dismissed, while president James Pallotta labelled the officiating "embarrassing" and "an absolute joke" - words that landed him with a UEFA charge.

In an interview with beIN Sports Turkey, Under explained he was similarly unimpressed by the efforts of Slovenian referee Damir Skomina as he and his team-mates tried in vain to repeat the comeback heroics that saw off Barcelona in the quarter-final.

"Liverpool started very well, they were quickly up 2-0 [in the first leg]," he said. "They were relentless and kept scoring.

"After 5-0, everyone was worried on our side. But they got tired as the game went on. In the last 15 minutes, we were dominant and scored two goals. If there were five minutes more, we could have scored a couple more.

"In Rome, there were two penalties which should have been given for us. I don’t want to criticise the referee, I’m only 20 years old but that’s the truth.

"I could have been in Kiev today. They took that away from us. That's my opinion."

Geri dönüşlerin hastasıyız! There is a very famous Turkish saying; "We love the comebacks!"  April 10, 2018

Under struggled to make an impression in Eusebio Di Francesco's side during the first half of this season, after joining from Istanbul Basaksehir.

A burst of six goals in as many matches at the start of February kick-started his fledgling career in the Italian capital and the forward has Scudetto ambitions for 2018-19.

"I have a lot to do next season for Roma," he said. "During the first half of the season I had adaptation issues.

Under added: "We want to end Juventus' streak. We can do it. This season, we have won important games, like the [4-2 victory] against Napoli.

"That game was in our total control. We reached the Champions League semi-finals. We have had a good season."