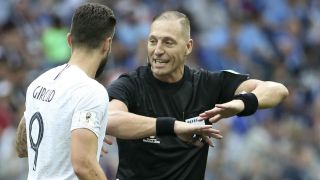 Nestor Pitana has described being chosen as the referee for Sunday's World Cup final between France and Croatia as a "dream".

The 43-year-old becomes only the second man to officiate the tournament's opening game - between Russia and Saudi Arabia - and the final, following in the footsteps of his compatriot Horacio Elizondo, who did the same in 2006.

Pitana was in charge for France's quarter-final victory over Uruguay, as well as Croatia's last-16 clash with Denmark, and says being given the final is akin to when he found out he was going to have a child.

"Very rarely have I experienced anything comparable in my life," he told FIFA.com.

"That feeling, that excitement. Maybe I could compare it with the moment when I was told that I was going to be a father. In terms of the sacrifice, the responsibility that it involves.

"For any kid who loves football, the dream is to get to the World Cup final.

"This team have worked so hard to get where we are, we've managed one of the greatest achievements in the world of refereeing. And now we want to finish the job, in the best way possible."