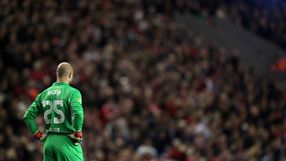 "I am absolutely convinced that Pepe would be more than delighted to return to his Barcelona, where they made him into an upstanding man from the time he arrived at the age of 12 until he left," Miguel Reina told radio station La Xerxa.

"I say it publicly, I would be delighted to see Pepe back at Barca, of course I would," added the former Barca and Atletico Madrid keeper.

"What father would not like to see his son at Barca? He has already been there but to return would be extraordinary."

Reina's Spain team-mate Valdes, 31, announced last week he would not renew his contract when it expires at the end of June 2014.

The 30-year-old Reina, a contemporary of Valdes in the Barca youth ranks, made his debut with the Catalan club at the age of 18 before moving on to their La Liga rivals Villarreal and eventually joining Liverpool in July 2005.

He signed a new six-year contract with the English Premier League club in April 2010.

"Pepe has shown sufficient proof of the calibre of goalkeeper he is and right now, and sorry for the lack of modesty, he would be up to the task and the ideal keeper for FC Barcelona without a shadow of a doubt," his father said.