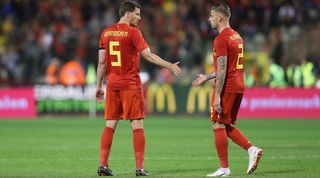 Champions League quarter-finalists Ajax are hoping to capitalise on their return to the big time by landing big-name signings this summer.

The Dutch side will lose midfield star Frenkie de Jong to Barcelona at the end of the season, and teenage sensation Matthijs de Ligt looks likely to follow, leaving the club with a rebuilding job on their hands if they are to replicate this year’s success.

However, those two departures alone will likely bring in over £100 million – giving Ajax some money to spend.

They have already begun the task of scouting out potential replacements, and Director of Football Marc Overmars has admitted they made a surprise approach for Tottenham Hotspur defenders Toby Alderweireld and Jan Vertonghen.

Both players came up through Ajax’s youth ranks, and have cemented their places at the heart of Spurs’ and Beligium’s defences – with FFT recently listing them both among the 10 best centre-backs in the world.

However, Alderweireld, 30, and Vertonghen, 31, have both apparently turned down the opportunity, according to Metro, with Premier League side Tottenham recently triggering contract extensions that will keep them in London until June 2020.