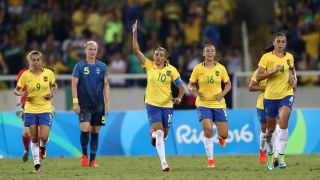 Brazil booked their spot in the Rio 2016 quarter-finals in women's football with a resounding win over Sweden on Saturday.

Led by Marta, the hosts claimed a 5-1 victory in Rio to ensure progression to the last eight from Group E.

The United States sealed their place in the last eight by beating France thanks to a Carli Lloyd goal, while New Zealand edged Colombia.

Canada are also through after beating Zimbabwe, while Germany came from behind to draw with Australia.

Also claiming a win were China, who were too good for South Africa.

Tan Ruyin wrapped up China's 2-0 win with one of the goals of the tournament.

From 40 yards, Tan went for goal with a tremendous strike, beating Roxanne Barker despite the goalkeeper's best efforts.

Barker got a hand on the shot, but could only palm it onto the crossbar and see it go in.

Also, Sara Dabritz dragged Germany back into their clash against Australia with a delightful lofted first-time finish with the outside of her left boot.

PLAYER OF THE DAY

Superstar Marta was in fine form for Brazil, scoring twice and setting up another in the big win over Sweden.

The five-time FIFA World Player of the Year set up Cristiane, who netted her record 14th Olympic goal.

Marta then took matters into her own hands, netting a penalty just before the break and a second after the interval.

"If this goal was scored by Lionel Messi it would be played for at least a week all over the world. But if it's a Chinese girl it will only be played in China for a shorter time. This is the difference between men's and women's football," - China coach Bruno Bini said of Tan's effort.

"It feels like a miracle. I have been in the national team for a long time, but I have not scored many goals," - Tan said, describing her goal.

"Never forget that USA are the world champions, [and] the current Olympic champions. Of course we are disappointed by the result, but we are determined to keep on," - France coach Philippe Bergeroo said after his side's loss.

Group matches are completed on Tuesday. Among those fighting to advance, Australia are favourites to beat Zimbabwe and France face New Zealand in crucial encounters.