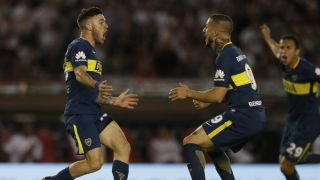 Uruguay international Nandez volleyed home the winner with 17 minutes remaining, sending Boca nine points clear at the Superliga summit and adding to River's misery after they were dumped out of the Copa Libertadores by Lanus' stunning four-goal comeback in midweek.

Edwin Cardona put Guillermo Barros Schelotto's side ahead before half-time when his majestic free-kick – awarded after a high foot from Nacho Fernandez resulted in the midfielder's dismissal – found the top-right corner.

Cardona saw a thumping effort tipped over by German Lux in the 12th minute, but he beat the River goalkeeper with a phenomenal free-kick into the top-right corner three minutes before half-time after Fernandez was shown red for a high boot which caught the Boca man in the chest.

Agustin Rossi denied Ignacio Scocco as the hosts pushed for an equaliser in the second period, but their hopes of a comeback were boosted after the hour mark when Cardona was given his marching orders having appeared to make contact with Enzo Perez's face.

There was to be a sting in the tail, though. As the hosts pushed for a winner they left themselves exposed at the back, and Nandez made the most of the space to etch his name in history as the winner of the 200th Superclasico in the top flight.