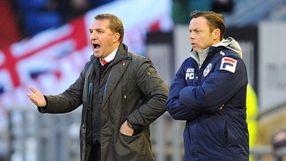 The seven-times winners were beaten 3-2 in the fourth round at the League One club after fielding a weakened side and Rodgers did not hold back in his criticism of his charges.

"We picked a team to come here and win the game - we know we've got a big week of games - but our mentality in that opening period was poor and ended up costing us," he told reporters.

"I was disappointed with the young players today. We're trying to give them experience and let them see what it's like to play for Liverpool.

"It's not just about playing for Liverpool, you've got to be able to be competitive and be a part of a group that is going to challenge for trophies."

In picking his team, Rodgers had one eye on a tricky week in the Premier League with Liverpool travelling to Arsenal on Wednesday and champions Manchester City next Sunday.

He said it was one thing being able to get fired up for a match against the big guns but in order to succeed, players also needed to perform in the less glamorous fixtures.

"If you're going to win trophies and go far in competitions, you need to be able to come to places like this and win. We weren't good enough for that," added Rodgers.

"The Premier League is nice - teams will stroke the ball, pass and give you time to get your shape. This is a different type of football - you've got to come and roll your sleeves up, be strong and aggressive.

"Unfortunately for us there were too many that weren't."

Rodgers said the Liverpool squad simply did not have enough strength in depth.

"I've always said we're trying to build a squad that can compete and that means putting teams out like today's and winning games," he explained. "That's about mentality and unfortunately we didn't have that today."