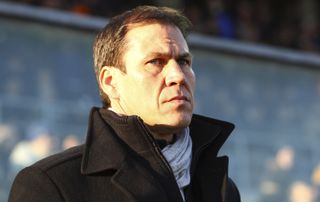 The top two in the league have been drawn together in the last eight of the domestic cup competition, but Roma's French head coach is only concerned about collecting victory on Sunday to stay in touch with the leaders.

Despite suffering only one defeat in the first half of the season, Roma find themselves eight points behind Juventus in Serie A and just two clear of third-placed Napoli.

"We must play like we did against Genoa (who Roma beat 4-0 last Sunday). We can only win if we're at our best.

"It's not easy to win two home games in a row. We'll need our fans and I hope to see lots of them at the stadium."

Garcia's first six months in charge at the Stadio Olimpico have seen Roma exceed expectations, but the 49-year-old still believes there is room for improvement.

He added: "What would I change from the first half of the season? I'm satisfied but you can always improve, there's a lot to do."