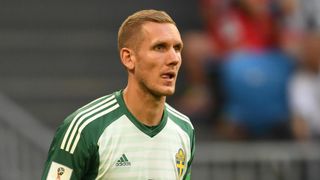 Roma have announced the signing of Sweden international Robin Olsen as a replacement for Alisson.

The Serie A side have spent an initial €8.5million to bring the goalkeeper in from Copenhagen, who could receive a further €3.5m in add-ons. He will wear the number one shirt.

Olsen replaces Alisson after the Brazil international moved to Liverpool for a fee that could rise to £65m, a world record for a goalkeeper.

"It's a big honour to come to Roma. It's the next step for me and I cannot wait to get started."

Olsen, 28, started all five Sweden fixtures at the World Cup as his side reached the quarter-finals, where they lost to England.

Monchi has been extremely busy in the transfer market, completing deals for players including Javier Pastore, Ivan Mercano, Davide Santon and Justin Kluivert.

And Roma's sporting director believes Olsen is ready to slot into Eusebio Di Francesco's team for the 2018-19 season.

"Robin is a goalkeeper with international experience and I think he can bring that level to Roma with him," Monchi said.

"I am confident he can build on the quality that has seen him firmly establish himself as Sweden's number one."

Olsen's arrival comes after Roma missed out on the signing of Brazilian winger Malcom from Bordeaux.

Although Roma had agreed a reported €40m deal with the Ligue 1 side, Malcom instead joined Barcelona on Tuesday.