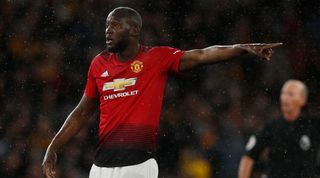 The Belgium international has previously spoken of his appreciation for Italian football, leading to speculation that a move to Juventus or Inter Milan could materialise this summer.

Speaking to Sky Sport Italia, the 25-year-old revealed that he previously had the chance to move to Turin after leaving Chelsea in 2014.

“When I left Chelsea I had the opportunity to go to Juventus,” he said.

“I don’t know why, but I didn’t feel it. Something didn’t convince me. The next day, (Antonio) Conte left Juventus.

“Serie A is a dream, it would really be a dream. I hope I can play there at some point, although right now I’m focused on United and finishing fourth.”

The striker was also asked about his first memory in football, which was an Italian-dominated affair.

“When I saw how Ronaldo rounded the goalkeeper, I realised that if I wanted to become a professional I would have to train very hard.”

Lukaku has a contract at Old Trafford until 2022, but his future has been cast in doubt after a difficult season in the Premier League, where he has scored 12 goals in 31 appearances.

QUIZ! Can you name the PFA Premier League Teams of the Year from the last decade?