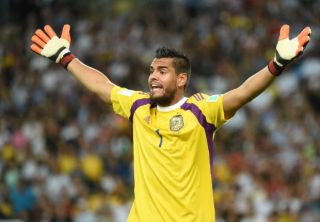 Romero impressed for Argentina at this year's World Cup and was linked with a switch away from the Serie A club once the showpiece concluded.

One of the clubs said to be interested in Romero were United, who have spent heavily in a desperate bid to return to former glories.

Romero barely played on loan at Monaco last season but hopes that an impressive season back in Italy may encourage United to move for him.

"I had two or three possibilities but none of them were positively concluded," Romero told Il Secolo XIX.

"I didn't ask for more money to go to Benfica and I also read that I turned down [Manchester] United.

"But in your opinion, would someone be able to refuse an offer from one of the world's top clubs?

"I want to show my value here, so I'll be able to find my space.

"I've spoken with the president, the sporting director and coach Sinisa Mihajilovic, who told me that should I do good things, he will give me an opportunity."