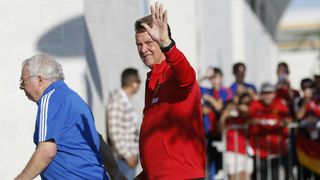 Sergio Romero lauded Manchester United manager Louis van Gaal, after linking up with the Dutchman for the second time in his career.

After 72 league appearances with Sampdoria from 2011-15, Romero signed a three-year deal, which the Manchester club announced on Sunday.

Romero previously was in goal under Van Gaal at AZ from 2007-09, and the Argentine said it was that Eredivisie stint that catapulted his career in the right direction.

Van Gaal and Romero celebrated winning the Dutch top flight title in 08-09, while the keeper had the equal-most clean sheets at the 2014 World Cup - helping the Argentinians to the final in Brazil.

"He is a great manager," the Argentina international told MUTV.

"He's the kind of boss who puts you at ease and from the first moment that I was given the goalkeeper shirt by him in 2007, he told me that I would play an important part in his squad.

"It was a vital period for me because from the moment I signed for him, my career started to really take off.

"He is someone who has been very important in my life.

"He is very honest and open as a person, he helps and reassures you and he cares about every player and every member of staff."

"Absolutely," he replied, when asked if he was looking forward to playing and aiming for trophies.

"From the very first moment that I heard there was a possibility of joining this club, I have been thinking constantly about lots of things, playing for the club, training with the other players, getting to know my team-mates, and winning silverware for United."