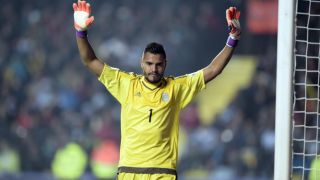 Manchester United have confirmed the capture of goalkeeper Sergio Romero from Sampdoria on a three-year deal.

The arrival of the 28-year-old gloveman, who has played 62 matches for Argentina, at Old Trafford is the final nail in the coffin of Victor Valdes' United career, with goalkeeping coach Frans Hoek having confirmed that the Spaniard will leave.

United announced Romero's transfer from Sampdoria, where he played 72 league games across three seasons, on Sunday.

"Sergio is very talented," said United manager Louis van Gaal, who worked with the Argentine at AZ between 2007 and 2009.

"He will be a great addition and I'm looking forward to working with him."

Romero is set to challenge David de Gea to be United's number one goalkeeper, although the former's arrival may strengthen speculation the latter will leave for Real Madrid - a transfer that has been expected throughout the close-season.

"To play for the biggest club in the world is a dream."

Romero started his senior career with Racing Club in his native Argentina before signing for AZ in 2007.