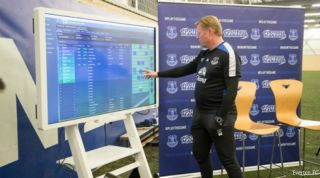 Collyer, a proud Evertonian, got Koeman to select his Toffees team of preference and set them out how he would tactically. Collyer also selected the Toffees to ensure the most even of playing fields.

The Dutchman opted for a 4-3-3 formation, which included wantaway midfielder Ross Barkley on the right wing and Dominic Calvert-Lewin on the left.

Meanwhile, Collyer brought Mason Holgate into his back three and went for a slightly more unorthodox 5-4-1 formation, perhaps suggesting he knows a trick or two about the FM game engine.

But, after some words of inspiration from Koeman at the break, his team pulled two goals back through Lukaku and substitute Ademola Lookman. Despite a late push for an equaliser from Koeman's boys, the match finished 3-2 to Collyer.

Speaking post-match, Koeman told Everton's official website: “It was very interesting for me to sit down with Paul and Football Manager to understand the technicalities of this computer game and get some insight into the history behind it.

“The game is incredibly realistic and detailed; Paul knew his way around the game very well but I began to get the hang of it in the second half.”

Collyer said Koeman had introduced him to some new ideas that he could take back to the game's creators Sports Interactive. Watch this space.