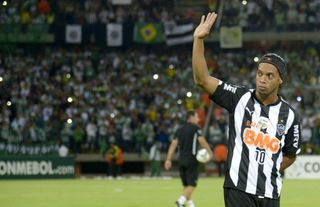 After it broke on Monday that the 34-year-old had left Atletico Mineiro, Ronaldinho's brother and agent Roberto de Assis had claimed the mercurial playmaker would announce his next club at a media conference two days later.

But when the time came on Wednesday for Ronaldinho to make the announcement, the former Barcelona and Milan attacking midfielder claimed he has yet to think about his future.

Ronaldinho's last appearance for Mineiro was in the second leg of the Recopa Sudamericana, which the Brazilian club won 5-3 on aggregate over Lanus of Argentina.

"To tell you the truth, I haven't even stopped to think about my future yet," he said on Wednesday.

"I took a few days to chill out, enjoy the [Recopa] title, and let my brother solve things about the club, so next week I'll start to see where my future will be."

The sudden departure of Ronaldinho from Mineiro after three seasons with the Brazilian Serie A club has sparked a frenzy of speculation of where he may be headed next.

Boca Juniors are reportedly leading the chase for Ronaldinho's signature, although there has reportedly been interest in the MLS as well.

One thing is certain, however, Ronaldinho has not given up football.

"No, this possibility is ruled out," he said.

Ronaldinho added that he understood that some Mineiro fans might be disappointed he decided to leave but hopes they remember him as the man who led them to their maiden Copa Libertadores triumph last year.

"I just want them remember me as a player who went there and made history. So, I can leave here with that pride of never having lost at home and winning the most important titles in the history of the club," he said.