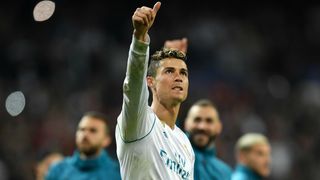 Cristiano Ronaldo is at "120 per cent" and will return from injury against Villarreal, Real Madrid boss Zinedine Zidane has confirmed.

The Portugal star has missed his side's last two LaLiga matches with an ankle injury picked up in the 2-2 draw with Barcelona at Camp Nou.

The 33-year-old resumed full team training on Tuesday, along with full-back Dani Carvajal, and Zidane plans to give the forward some game time on Saturday in a bid to get him sharp for next weekend's Champions League final.

"Cristiano is at 120 per cent," Zidane told a news conference on Friday. "He trained normally all week and he is ready [for Villarreal].

"I don't think about injuries. It's good to play [on Saturday] to find rhythm and intensity. We have to play well and be ready for the final. Nothing can replace the intensity of a match."

Gareth Bale has impressed during Ronaldo's absence and scored twice during a star performance in the 6-0 thrashing of Celta Vigo last week.

"He trains well, he wants to do well," Zidane said of the Wales international. "The important thing is to see him looking good physically."

There were some great goals and great saves in our penultimate training session ahead our final match of the season! May 17, 2018

Zidane also dismissed any concerns that Karim Benzema's focus will be affected by having not been included in France's final World Cup squad.

"He has to concentrate on Madrid. He knows that," he said. "It's not a new situation. The most important thing is that everyone is okay physically."

Zidane has admitted he is not happy with the first half of Madrid's LaLiga title defence this season, which allowed Barcelona to pull clear before securing the title against Deportivo La Coruna last month.

However, he hopes to finish the season in style by beating Liverpool to win a third Champions League trophy in a row – something he thinks is more likely as his squad are now largely injury free.

"It would mean we've worked very well, that the message got through well," he said. "I'm happy to be able to play the final, it's important for me in my career as a coach.

"The most important final to me is this one, not the previous ones. We have to give everything.

"I'm very happy to have everyone healthy. I don't like to have injuries. I want everyone available so we can work.

"To reach the final with everyone healthy is very positive. It's the most important part."