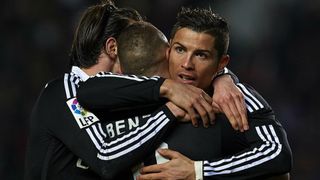 The Barca trio - nicknamed 'MSN' - have been in sensational form so far this season, firing the club to the top of La Liga and into the Copa del Rey final, with their friendship away from the pitch touted as a key factor behind their on-field form.

However, the Portuguese does not feel he needs to be best friends with others at the club, citing the success he enjoyed at Manchester United despite rarely speaking to senior players.

"In the Manchester United team that won the Champions League [in 2008], I did not speak with [Paul] Scholes, [Ryan] Giggs and [Rio] Ferdinand, beyond 'hello', but we had a great team," said Ronaldo.

"I do not have to dine with Benzema or invite him to my house. What is important is on the pitch. I do not need little kisses and hugs."

Ronaldo said he is used to being the focus of criticism from the media, but remains happy at Madrid.

"It's normal [that people have doubts about me], or that's how I see it. It's like with a son, you give him everything and when you didn’t give more, they will cry," he added.

"I face it as a normal situation. I wish I can keep playing this bad until the end of the season.

"I feel good and happy, in a club that gives me affection. I always play, I score goals from time to time. I cannot be happier. I'm at the best club in the world."

Madrid face Roma in the first leg of their Champions League last-16 tie on Wednesday, and the Portuguese thinks his team are favourites for the trophy.

"In all competitions, more so in the Champions League [Madrid are favourites]. We have more titles than anyone in this competition," Ronaldo said.

"We can still win La Liga, but we have a few points less."