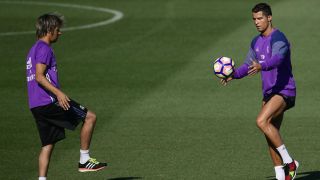 Cristiano Ronaldo regularly comes up against the best defenders in the world but the Real Madrid star has particular trouble team-mate Fabio Coentrao.

The Madrid pair and Portugal team-mates faced each other during training on Thursday and it is safe to say four-time Ballon d'Or winner Ronaldo had a tough outing.

"One on one in training. Happy to play against one of the world's toughest defenders to overcome. My brother Coentrao," Ronaldo wrote in a caption after uploading a photo of the duo in training.

Coentrao, 28, has found game time hard to come by at the Santiago Bernabeu this season, only managing 22 minutes of action for the LaLiga leaders.

In total, Coentrao has made four appearances in all competitions.

As for Ronaldo, he has scored 13 goals as Madrid sit four points clear of reigning champions Barcelona and Sevilla atop the table.