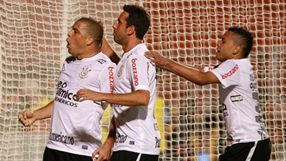 Corinthians' home victory in Sao Paulo put them top of the Brazilian championship standings on 63 points with three matches to go.

Ronaldo, 34, chased a lofted ball into the box and was brought down by defender Gil three minutes from time. Cruzeiro players protested in vain and Gil was sent off for a second yellow card.

"You can already give our players their holidays. You may as well give the title to Corinthians or Fluminense," he said tongue in cheek. "It's the Rio-Sao Paulo axis."

Ronaldo, who began his career at Cruzeiro, said there was nothing wrong with the decision.

"I was hit hard from behind right after controlling the ball with my chest. I don't think there was any doubt it was a penalty," he said.

"Cruzeiro have an excellent, attacking team with fast players. I think we got this win with guts and stature."

Struggling champions Flamengo were thumped 4-1 away by Atletico Mineiro and were sucked back into the battle to avoid relegation.

Former Flamengo strikers Obina and Diego Tardelli and midfielder Diego Renan, twice, scored the goals that lifted Mineiro out of the relegation zone for the first time in months.