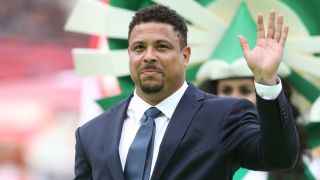 Brazil great Ronaldo plans to lose weight in the hope he can contribute in Real Valladolid training after becoming the majority shareholder of the Spanish club.

The former Real Madrid striker acquired a 51 per cent stake for a reported €30million at the start of September, becoming chairman of the club's board of directors as a result.

It had been unclear as to how much input Ronaldo would have with respect to the first-team squad, with it being suggested that a former player of such standing could have a strong impact on the training pitch.

The World Cup winner, who struggled with weight issues towards the end of his playing career, has now outlined plans to get fit and involved with training.

"I have not come to play," Ronaldo told El Norte de Castilla. "I am not in shape for that.

"I will start training and getting fit so I can train with the boys and contribute a bit in the technical area, always in agreement with the coach.

"This is going to be a very important year for this project, the most important one.

"We do not have the best facilities in the world, but it is about getting the best out of our facilities for our players, for our academy."