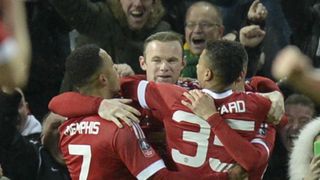 Wayne Rooney was pleased to get the job done for Manchester United after they endured a frustrating FA Cup third-round tie against League One side Sheffield United at Old Trafford.

Louis van Gaal's team endured now familiar struggles in front of their home fans and had to wait until injury time to seal a 1-0 win, with Rooney converting a penalty after Dean Hammond brought down the lively substitute Memphis Depay.

Rooney said his team-mates found it difficult to craft chances against their third-tier opponents and conceded that United would ideally have created more than the sparse number of goalscoring opportunities on view.

"I think it's always the case that as football players you want to win games and the way you win games is by creating chances and scoring goals," he told BT Sport.

"We found it tough to break them down but we did what we needed to do, we won the game and we're in the next round."

Rooney was speaking moments after his former team-mate Paul Scholes launched his latest tirade against United's style of play under Van Gaal.

But the England captain defended the current rate of progress at Old Trafford and was happy to avoid being the victim of an FA Cup shock.

"You can go on and jump on everyone's bandwagon but we know we're improving as a team – we can feel that," he added.

"You look at Chelsea, who won the Premier League last year and were knocked out of the FA Cup by Bradford City [last season].

"This cup can throw up a lot of surprise so it was just important that we got through and, thankfully, we've done that."