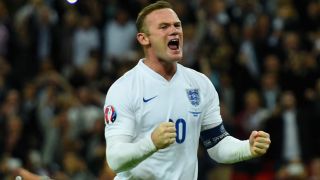 Former England captain Steven Gerrard has launched a staunch defence of current skipper Wayne Rooney, insisting there is no player more capable of leading the country's attack at Euro 2016.

The Manchester United striker, 30, became the nation's all-time record goalscorer during a qualifying campaign that saw Roy Hodgson's men win all 10 of their matches.

However, his form at club level has been poor this season, scoring only two goals in 15 Premier League appearances for United under Louis van Gaal.

Rooney's struggles, coupled with impressive form of Tottenham forward Harry Kane and Leicester City striker Jamie Vardy, has led to calls he should be replaced at international level, but Gerrard, 35, does not agree.

He told the Daily Mail: "Jamie Vardy and Harry Kane are doing well but, in a big game, who is England's best chance of scoring?

"Does anyone think it is not Wayne Rooney? If there is a penalty in the last 10 minutes to progress out of a group or into a quarter-final, who would you want to take it?

"Who does everyone in the dressing room at Manchester United and England look to for inspiration? Who are they all hiding behind, pressure-wise, when it is not going well?

"I am not saying nobody should criticise him, but let's analyse it properly. He has not lost ability and he is probably the only person capable or proven to get the goals you need to progress in a tournament.

"Wayne Rooney does more than just score goals. He has an impact on the whole team and squad."

Gerrard acknowledges that Rooney's performances have been below his best this season, but he feels it is too easy just to call for him to be dropped.

The former Liverpool man continued: "He has said he is not in the best form of his life but people need to support him and help him get into better form for England and United.

"The easiest thing to do is point fingers and say 'get him out'. I have been there when you are under a bit of pressure and everyone is having a go. No one wants to turn that round more than you do but you need help."