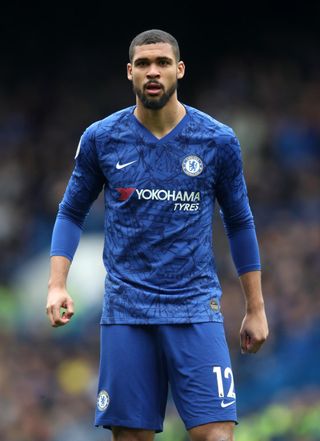 The England midfielder had to be helped away from the pitch after going down in the second half and was later seen on crutches, raising fears he will be out of action for the Blues’ Europa League final against Arsenal.

Chelsea were in the US for a charity friendly as part of the club’s Say No To Antisemitism campaign.

Prior to the fixture, Sarri lauded the trip’s purpose, but conceded that he felt his men needed to rest.

As a coach, of course, I am a little bit worried because I know very well that the team now needs rest.Nevertheless, the Italian fielded a strong starting 11 at the Gillette Stadium in Foxborough, Massachusetts, where owner Roman Abramovich was in attendance on Wednesday night.

Ross Barkley got Chelsea off to a rapid start with the first of two goals for the midfielder, finding the net in the third minute with a ball intercepted from a clearance effort by Revolution defender Jalil Anibaba.

Olivier Giroud put Chelsea up 2-0 just before the half-hour mark, heading a cross from Davide Zappacosta.

Sarri made six changes at half-time, among them bringing on Loftus-Cheek in place of Mateo Kovacic.

Barkley made it 3-0 for the visitors just after the hour, though celebrations were short-lived after Loftus-Cheek went to ground with an apparent injury minutes later.

After being helped away from the pitch, he was replaced by Chelsea Academy Player of the Year Conor Gallagher.

New England managed to hold off Chelsea for the rest of the match, including an attempt by Pedro from outside the box in the closing stages.

Chelsea will play Arsenal for the Europa League title in Baku on May 29.

.@brianwright777 with a good look at goal for the #NERevs, but Caballero makes the save for @ChelseaFCpic.twitter.com/oWYOuEaJQY— New England Revolution (@NERevolution) May 16, 2019

Prior to the New England friendly, Sarri had voiced concerns over the timing of the trip to the US.

“We go there for a good reason I think, so as a man I am very happy to go there,” he said.

“As a coach, of course, I am a little bit worried because I know very well that the team now needs rest.

“So it is not the best way to prepare for the final, I think.”