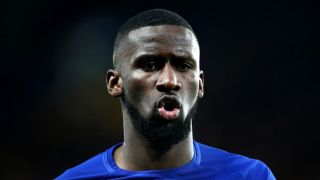 Antonio Rudiger has given his backing to under-fire Chelsea manager Antonio Conte as the Italian's future at Stamford Bridge remains unclear.

Conte marked his debut season in charge by winning the Premier League in 2016-17 but Chelsea's title defence fell well short, with a fifth-placed finish seeing them miss out on the Champions League.

The capital club did still secure silverware by lifting the FA Cup, beating Manchester United 1-0 in the final, but that has not stopped speculation over Conte's position.

Former Napoli coach Maurizio Sarri has long been linked with Chelsea, while media speculation has suggested Laurent Blanc is also a strong candidate to take charge.

"This is what I'm about. I want to win titles. If he stays or if he goes, it's the same situation."

Centre-back Rudiger has been selected in Germany's World Cup squad, but he faces a battle to make Joachim Low's XI ahead of likely starters Mats Hummels and Jerome Boateng.

Yet the former Roma player is not too concerned at being down the pecking order, adding: "I will wait and see what happens. I'm ready to go if called upon and will give it everything I've got."

Reigning world champions Germany are alongside Mexico, South Korea and Sweden in Group F at this year's tournament in Russia.