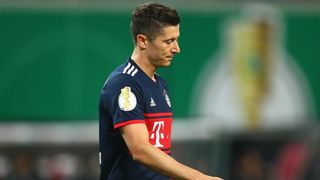 Bayern Munich executive board chairman Karl-Heinz Rummenigge does not believe they need to sign more strikers to support Robert Lewandowski.

The Poland international suggested on Saturday he is struggling to cope with the demands of leading the line in three domestic competitions and for the national team.

The issue has come to the fore in the build-up to Tuesday's Champions League clash with Celtic in Glasgow, with Lewandowski unable to travel with the team due to a muscle injury.

Rummenigge insists Lewandowski will only miss the game out of precaution, though, and denied they need more options in the squad.

"It is only a precaution," he told the media prior to leaving Munich. "If we had been playing against Real Madrid, he would have probably travelled with us.

"I don't think we have any problematic areas.

"It certainly isn't nice that we have several attacking players injured at the moment. But our coach is known for the fact that he does not complain. He will find ways to work around it."

Kingsley is on board as begin their journey to Glasgow, but stays behind in Munich. October 30, 2017