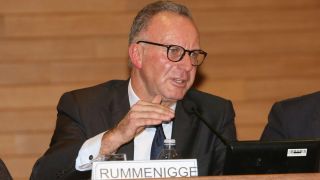 Bayern Munich chairman Karl-Heinz Rummenigge has rekindled the idea of creating a European super league involving the elite teams from the Premier League, Bundesliga, Serie A, La Liga and Ligue 1.

Such a competition was previously put forward by the now-disbanded G14 group of Europe's top clubs, and Rummenigge, chairman of its replacement the European Club Association, has raised the proposal once again.

The Bayern executive believes the growing superiority of a handful of sides in their respective countries means such a proposition is a distinct possibility in the future.

"You can't rule out that, in the future, we could create a European league with the major clubs from Italy, Germany, England, Spain and France, under the umbrella of UEFA or a private organisation," Rummenigge said.

"It would be a competition with 20 teams and perhaps we would play some matches in America and Asia.

"The best teams are becoming stronger and stronger in relation to others in the main leagues and another league is in fact already being born beyond the Champions League."

"The Champions League is worth €1.5billion in television rights compared to almost €7billion for the NFL. However, market studies show that of the two billion sports fans worldwide, 1.6billion are football fans with American football accounting for just 150million fans," he said.

"This must make people think about the untapped potential regarding the format of current football competitions."