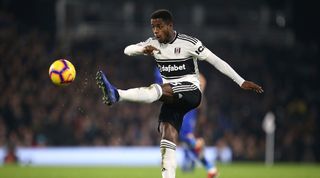 The 19-year-old has been targeted by the Premier League side as the successor to Danny Rose, who has been allowed to find a new club after being left at home for their pre-season tour of Asia.

The Evening Standard reports that Spurs’ three-year long pursuit of Sessegnon is coming to an end despite interest from Arsenal and Liverpool.

Fulham set a valuation of £40 million for the youngster, who is currently recovering from a hamstring injury he picked up on international duty with England Under-21s.

However, Spurs are confident of closing a deal worth £25m for the left-back, who is in the final year of his deal with the recently-relegated side.

Big European clubs such as PSG, Borussia Dortmund and Juventus have kept a close eye on developments but Sessegnon wants to stay in London.

QUIZ! Can you name Gareth Bale's 50 most frequent team-mates?

RANKED! The 101 greatest football players of the last 25 years