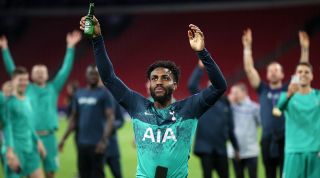 Gareth Bale will get a minimum £20 million welcome bonus if he opts to move to the Chinese Super League, the Daily Mail reports. A number of clubs would be willing to at least match his current wages and offer an unprecedented bonus structure, the paper claims.

Meanwhile, Real Madrid’s hopes of landing Paul Pogba could depend on Bale’s departure, according to reports. The Daily Mirror says Pogba remains Real’s number one transfer target, but they would have to get Bale’s wages off their books before making a lucrative offer for the Manchester United midfielder. United are said to want around £180 million for Pogba.

Arsenal’s attempts to land Kieran Tierney have reportedly stalled after the Gunners had several bids for the 22-year-old rejected. The Daily Mail reports that the north Londoners want to stagger payments for the £25 million-rated player, but Celtic want more money guaranteed up front.

Tottenham appear set to complete two signings this week, according to the Daily Mirror. A move costing between £54 million and £60 million for Real Betis midfielder Giovani Lo Celso is said to be imminent, while the Champions League finalists are also close to signing Ryan Sessegnon from Fulham for around £20 million, the paper reports.

Maurizio Sarri has personally intervened in order to land Danny Rose, the Daily Mail says. The Juventus boss specifically asked his employers to make a move for the Spurs left-back, the paper says. Paris Saint-Germain and Schalke are also said to be interested in the England defender.

Thiago Almada: Manchester City are continuing talks with Velez Sarsfield over a £16 million deal for the Argentine youngster, according to the Daily Mail. Manchester United and Atletico Madrid are also interested in the 18-year-old, while Velez’s coach wants him to stay, the paper adds.

Paulo Dybala: Juventus are reportedly willing to sell the 25-year-old to Manchester United if the Premier League club matches their £70 million-£90 million valuation, the Daily Mail reports. Ole Gunnar Solskjaer is an admirer of the Argentina international and will look to bring Dybala in as a potential replacement for Romelu Lukaku or Paul Pogba, the paper adds.

QUIZ! Can you name Gareth Bale's 50 most frequent team-mates?