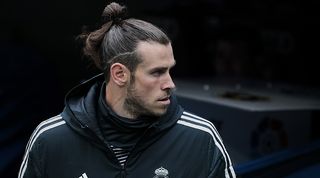 "We hope he leaves soon. It would be best for everyone. I have nothing personal against him, but there comes a time where things are done because they must be done."

After removing him from the WhatsApp group, putting cling film over the toilet seat and persistently flicking him on the ear, Zinedine Zidane has decided enough is enough when it comes to getting rid of Gareth Bale at the Bernabeu.

Having so far tried and failed to oust his expensive asset out of the club this summer, Zizou used his latest press conference to declare that he was desperately trying to usher Bale towards the door marked ‘sod off’. Not easy, however, when said player is earning £600,000 per week.

And now things are getting ugly. Bale’s agent Jonathan Barnett has called Zidane “a disgrace” and admitted that he is “working on” a move away (possibly to China). Anywhere with a good golf course, presumably.

Oh, Gareth. Remember the good old days? Winning things? Smiling? Playing with Peter Crouch? Yes, those. In today’s quiz we’re recognising the 30-year-old’s 50 most frequent team-mates for club and country – that's Southampton, Tottenham, Madrid and Wales – and giving you 10 minutes to get as many as you can.

When you’re done, send those scores with a screenshot to @FourFourTwo and we’ll retweet them to our followers to see how they stack up. Good luck!