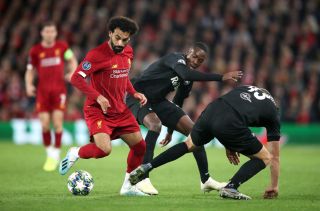 Defending champions Liverpool’s first European outing on home soil since winning the cup in Madrid was not quite the celebration they would have anticipated after a tense 4-3 win Red Bull Salzburg.

Anfield was hosting a landmark 100th European Cup match but very few of those occasions would have seen them squander a three-goal lead.

Leading through goals from Sadio Mane, against his former club, a rare but brilliantly worked Andy Robertson goal and Mohamed Salah, the European champions were in cruise control.

It merely seemed a matter of how many more with almost an hour to play but uncharacteristic casualness crept into their play and they almost paid dearly for it.

The last time this ground hosted Champions League football it witnessed one of the competition’s greatest comebacks as Barcelona were defeated 4-0 in the semi-final second leg.

Five months on an altogether different turnaround left Jurgen Klopp’s side confused and chasing shadows as Salzburg proved there is much more to then than teenage goalscoring sensation Erling Braut Haaland.

The son of former Leeds, Nottingham Forest and Manchester City midfielder Alf-Inge Haaland was only fit enough for a place on the bench after with illness but in his absence Hwang Hee-chan and Takumi Minamoto pegged their hosts back to 3-2.

4 – FC Red Bull Salzburg became only the fourth team to score three goals away at Anfield in the UEFA Champions League (after Barcelona, Chelsea and Real Madrid), and the only one of those four to fail to win the game. Valiant. pic.twitter.com/XjkC32jyXo— OptaJoe (@OptaJoe) October 2, 2019

With Salzburg coach Jesse Marsch sensing blood he sent on Haaland and the Norwegian scored his 18th goal of the season within four minutes.

There was more than a brief moment of panic as manager, players and fans questioned how this could have happened.

However, there was still one more twist to come, with Salah’s volley settling things 20 minutes from time.

Their defence, with regular centre-back Joel Matip’s replacement Joe Gomez showing obvious signs of ring rust, was breached seemingly at will in the second half.

Napoli’s goalless draw in Genk offered the Reds every incentive they needed to take the game to their Austrian opponents, who were almost undone in the opening minute.

A slick passing move cut a swathe through Salzburg’s attempted high press but when Mane offloaded to the overlapping Robertson inside the penalty area he got his feet in a tangle.

Nine minutes in Mane, who scored 45 goals in 87 games for Salzburg between 2012 and 2014, broke the deadlock after bursting down the left and running onto Roberto Firmino’s delightfully weighted through ball to stroke home with his right foot.

Next came a real collectors’ item as Robertson began a move from inside his own half and continued his charge forward to side-foot home fellow full-back Trent Alexander-Arnold’s cross at the near post for his first goal since May 2018 and only his second in 89 games for the club.

Salah smashed a half-volley wide before benefiting from Firmino’s parried header from Mane’s cross to score from close range.

At that point it seemed the defending champions would stride to victory but another moment for the archives saw Virgil Van Dijk sold a dummy by Hwang in the penalty area for the Salzburg forward to start the comeback by beating Adrian.

Adrian’s overly casual approach to Gomez’s early second-half back pass saw the ball rebound wide off Patson Daka but it typified a lackadaisical approach for which they were to pay when the unmarked Minamino volleyed home Hwang’s left-wing cross.

Sensing their chance Haaland was immediately thrust into the action with Dominik Szoboszlai firing into the side netting.

The warning was not needed as the unattended Haaland rolled home a simple shot from three yards from another Hwang’s cross.

Marsch will view the booking he received for his charge down the touchline towards the away fans as well worth it in the circumstances.

When the bewilderment finally began to subside, Salah struck a brilliant winner, volleying home Firmino’s knockdown for his 12th goal in 13 Champions League appearances at Anfield.

Mane missed a near-post header from Alexander-Arnold’s corner which would have made the finish less anxious than it was but a first win is in the bag.