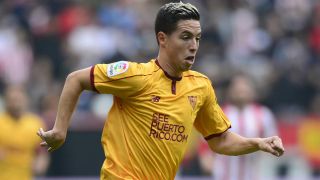 Sevilla will give Samir Nasri as long as possible to prove his fitness for their Champions League clash with Juventus on Tuesday.

Nasri missed this weekend's 3-2 victory over Deportivo La Coruna due to a hamstring problem.

Since moving to LaLiga on loan from Manchester City the 29-year-old has enjoyed something of a revival, scoring three goals in 11 appearances in all competitions.

However, with Sevilla only needing a point to guarantee a knockout place, Nasri may not be needed even if he is able to prove his fitness to Sampaoli.

"We will evaluate Nasri in the next few hours," the coach told a media conference.

"Today he trained much better than yesterday. If he is well, our idea is that he will play.

"However, we will take into account that we have to face more matches and against Lyon we have another opportunity to qualify."

Though victory is not crucial for Sevilla, Sampaoli has no intention of playing for a draw when the Serie A champions come to town.

"We don't think about a draw," he added. "We want to take the game to them.

"Juventus are dangerous at counter-attacks because they have fast players and are strong in all facets of the game.

"We have to press them to inconvenience them."