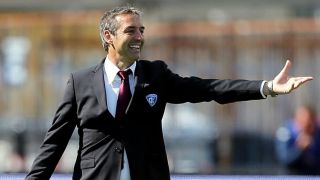 Sampdoria have completed the signing of forward Patrik Schick from Sparta Prague.

The Serie A side have confirmed that the deal for the 20-year-old is done after he successfully passed a medical with them on Wednesday.

Samp have reportedly paid Sparta a €4million transfer fee and tied Schick to a four-year deal, although neither of those details have been officially confirmed.

The striker spent last season on loan at Bohemians in the Czech top flight, netting eight goals in 27 appearances.

Schick scored on his Czech Republic debut against Malta in May and was named in the provisional squad for Euro 2016, but was not in their final selection for the tournament.

Samp have also signed Ante Budimir and Leandro Castan ahead of the new season as they re-build their squad.

They recently sold attacking midfielder Joaquin Correa to Sevilla in a big-money deal and there has been a change in the coaching department, with Marco Giampaolo replacing Vincenzo Montella after his move to AC Milan.