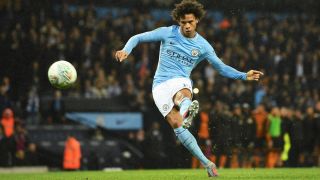 Pep Guardiola conceded he is surprised to have Leroy Sane potentially among his attacking options for Tuesday's Champions League tie at Basel.

City return to the last-16 stage of Europe's top competition having established a dominant 16-point lead at the top of the Premier League, although injury concerns have mounted for Guardiola over recent weeks.

The City boss reported Sane would be absent for up to seven weeks with ankle ligament damage sustained in the 2-0 FA Cup fourth-round win at Cardiff City two weeks ago.

But the Germany winger stepped up his recovery last week, took part in City's pre-match training session on Tuesday and flew with his team-mates to Switzerland.

"I am surprised," said Guardiola, who refused to rule out using the 22-year-old at St Jakob-Park.

"He has worked very hard. He wants to help us. He is not in perfect condition but he is with us."

On whether Sane would start against the Swiss champions, he added: "He's had one training session. He is young."

Great to be back in training with the boys February 12, 2018

The defender subsequently apologised but, not for the first time, Guardiola complained over players not being protected adequately from robust treatment in England.

Ahead of the latest round of Champions League matches – in a move that could be interpreted as a response to the former Barcelona and Bayern Munich boss' concerns – UEFA issued a directive urging referees to take "proper sanctions" against players committing serious foul play.

The statement read: "Europe's referees are being asked to play their part in protecting football's image as the second half of the European club competition season gets under way.

"The match officials act as ambassadors for the game, and are responsible not only for upholding the laws on the field of play, but also for protecting the players and ensuring their safety – and they are being instructed to punish those who commit offences or behave in a way that has an impact on how football is perceived.

"UEFA's matches are seen throughout the world, and the European body is determined that a positive image of the game should be shown, in particular to younger fans who regularly watch the stars in action.

"Consequently, referees are urged to take proper sanctions against players who commit serious foul play or make reckless challenges that might injure an opponent and endanger a career."

Asked about the directive, Guardiola said: "It's not the moment to talk about that. I spoke many times about that, so it is not necessary to talk more."

Guardiola also has David Silva (hip) and Fabian Delph (knee) back among his squad to face Basel, although Gabriel Jesus and Benjamin Mendy remain sidelined with their respective knee ligament injuries.