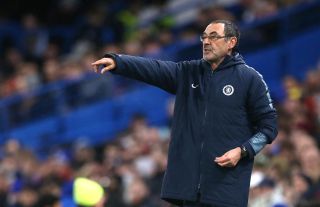 Chelsea will take their fight against FIFA’s two-window transfer embargo to the Court of Arbitration for Sport (CAS), with head coach Sarri admitting the Blues will struggle to chase next term’s league title without new recruits.

Chelsea were fined £460,000 for 29 breaches of the international transfer rules on minors, and FIFA threw out the Blues’ appeal on Wednesday.

“It’s very difficult to cover the gap at the moment; we need to work, probably we need to do something from the market,” said Sarri, with third-placed Chelsea 24 points behind league leaders City and 23 behind Liverpool.

“Of course, we have to work and we have to try. In my opinion we can reduce the gap.

“I don’t believe when you buy 10 players, I think that we have to buy only one, two players, otherwise it’s very difficult to improve immediately.

“I think we are a very good team, so we need only one, two players, no more.”

FIFA confirmed it has “partially upheld” Chelsea’s appeal, but only in allowing Chelsea to sign European players aged under 16.

The ban on signing over-16s and the fine remain in place, leaving Chelsea hugely frustrated.

The Blues will now hope that CAS will force a suspension of the ban pending another appeal but FIFA will likely be in opposition.

Real Madrid continue to fight to prise Eden Hazard away from Chelsea this summer, with Chelsea understood to be holding out for a £100million fee for their Belgium talisman whose contract expires next summer.

Defender David Luiz and Olivier Giroud are out of contract at the end of this season, and the Blues will most likely look to retain both men should they face that two-window transfer embargo.

Mateo Kovacic and Gonzalo Higuain are on loan and it remains unclear whether Chelsea can bring either man back for next season.

“The Club is very disappointed that the transfer ban of two consecutive registration periods was not overturned,” read Chelsea’s statement.

“Chelsea FC categorically refutes the findings of the FIFA Appeal Committee. It acted in accordance with the relevant regulations and will appeal the decision to the Court of Arbitration for Sport (CAS).”

Sarri remains intent on remaining at Chelsea next season, despite continued uncertainty about his position.

The former Napoli manager insists he would manage without new senior faces at Chelsea next term, despite the clear constraints.

Asked if he would be ready to promote youth talents to the first team next term, Sarri said: “I like to play with young players, so for me it’s not a big problem.

“At the moment, we spoke one month ago about the pre-season, the program of the next season.

“But we didn’t speak about the market, also because at the moment we don’t know if we’ll be able to go into the market.”

Speaking ahead of the second leg of his side’s Europa League semi-final with Eintracht Frankfurt at Stamford Bridge, with the two sides locked at 1-1, Sarri added: “Every month I have a report, about the players on loan, we have 45 or 46 players on loan.

“Of course, we need to consider who is ready.

“Two or three of those players are very interesting of course. But we need to consider the level.”