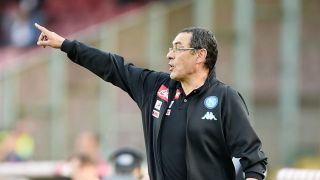 Napoli coach Maurizio Sarri has indicated he will stay at the club for another season as they hunt for their first Serie A title since 1989-90.

Sarri led Napoli to a club record points total of 86 this season but missed out on automatic qualification for the Champions League, finishing third behind Roma and champions Juventus.

President Aurelio De Laurentiis has compared Sarri to Manchester United legend Alex Ferguson and said the Italian, who has been at Napoli since June 2015, can stay at the club "for life".

And the former Empoli boss, who was given the Enzo Bearzot Award for the best Italian coach on Tuesday, assured he intends to remain at the Stadio San Paolo.

"My feeling at this point in time is that I'm not finished at Napoli," Sarri said. "I have a job to complete. I'm absolutely not worried about the future.

"I have a special relationship with this city and the fans have always been behind me. Even after draws, the fans accepted the result. I think that's an example of a great culture and I dedicate this award to them, since I haven't been able to give them the prize I'd very much like to."

: "Thanks to the club,the team and the supporters. I want to share this Award with everybody,and to dedicate it to " tooMay 30, 2017

Napoli have tied Dries Mertens down to a new contract, ending speculation linking the 28-goal Belgian with a move to Manchester United, and Sarri noted Napoli have young players who will continue to develop as they try to end Juve's six-year dominance of Serie A.

"We're competitive and we gave our best in every competition," Sarri added.

"On a tactical level we're not lower than anyone, and now we have a lot of talented youngsters.

"In this last season all the teams fought to the end, and that's a sign of a growth in mentality."