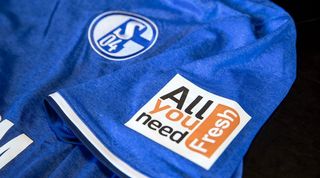 Schalke have become the first professional sports team to use smart clothing.

The Bundesliga club have teamed up with their online shirt sponsor, supermarket AllyouneedFresh, which allows fans to make purchases inside the stadium using their new shirt.

The club will reward fans for doing so by giving them discounts they wouldn't usually see if they used traditional payment methods.

Sadly, the shirts the players wear won't have a chip in their kit, according to head of communications Anja Kleine-Wilde.

"They rarely go to kiosks at half-time to quickly get a currywurst or a beer," she said.