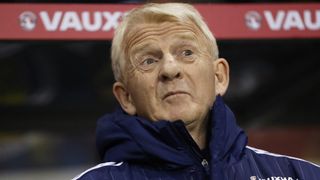 Scotland manager Gordon Strachan hailed his side's vital 3-0 away win over Lithuania on Friday as a near enough complete performance.

Needing three points to stay in touch with Group F's top two in World Cup qualifying, the visitors scored twice inside the opening half-hour and added a late third through James McArthur in a highly polished display.

Although they were unable to close the gap on second-placed Slovakia, Strachan's side are still well in contention to earn a play-off place.

And the former Southampton, Celtic and Middlesbrough boss conceded even he was surprised by one of the finest 90 minutes he has seen from his side.

"I knew they could put in a good performance but that was near enough a complete performance," Strachan told STV.

"For a manager who turned into a spectator at one point - and that is what I did, because I just went 'let them go' - they made it easy for us as a coaching staff because of their performances, their bravery on the ball, their energy.

"We asked them to use their energy, not just to pass. The energy had to come as well to allow more space and that is what they did."

Thanks to the brilliant fans both in Vilnius and back home in Scotland for your tremendous support this evening. September 1, 2017

Slovakia's win over Slovenia did help Scotland climb to third in Group F as they sit four points off second with three matches remaining.

Strachan insists his team are confident of turning their three-match unbeaten run in qualifying into a potential World Cup berth.

"We never felt out of it. Over the last 18 months it has been changing in terms of energy," he said.

Scotland are back in action on Monday as they host struggling Malta, who lost 4-0 to England in the group's other match.