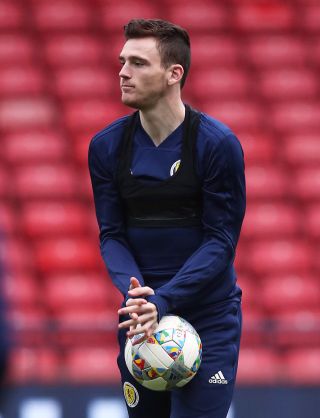 Andy Robertson became the latest player to drop out of Scotland’s opening Euro 2020 qualifier just before the squad set off for Kazakhstan.

The Liverpool left-back has a dental problem which requires surgery and will miss Thursday’s game in the Astana Arena, but could feature against San Marino three days later.

Scotland captain Robertson played in a Premier League win over Fulham on Sunday but is set to be replaced at left-back by Kieran Tierney.

Mulgrew has missed his club’s last two games after suffering a hamstring injury and his absence leaves Scotland facing issues in central defence.

Aberdeen centre-back Scott McKenna also emerged as an injury doubt for the after the 22-year-old played with a heavily-bandaged thigh during his team’s 1-1 draw with Livingston on Saturday.

Findlay was a Scotland Under-21 regular and has impressed under Steve Clarke at Kilmarnock. The other two centre-backs in the squad are John Souttar of Hearts and Hamburg’s David Bates.

Archer was dropped from the Millwall team for the midweek victory over Birmingham and was not in the squad for Sunday’s FA Cup quarter-final defeat to Brighton.

Bannan – who has not featured under Scotland boss Alex McLeish – played the full 90 minutes and set up three goals as Sheffield Wednesday beat Blackburn 4-2 on Saturday.

There was better news for McLeish as key midfielder Callum McGregor played the full game as Celtic beat Dundee 1-0, before meeting up with his international team-mates at Glasgow Airport.

The 25-year-old had been missing for four matches with a calf problem.