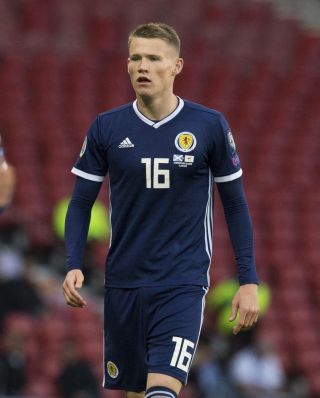 Scott McTominay feels Scotland manager Steve Clarke is giving the squad all the information they could possibly need – now it is up to the players to take responsibility and get some big results.

Several members of the squad have praised Clarke for the clarity and structure he has brought in since taking charge ahead of the June double header against Cyprus and Belgium.

But the Manchester United midfielder knows players have to take the lead out on the pitch when they take on Euro 2020 rivals Russia and Belgium at Hampden in the coming week.

This is our turf. This is your team.— Scotland National Team (@ScotlandNT) September 2, 2019

The 22-year-old said: “Everybody knows their roles and responsibilities on the pitch and that’s first and foremost set out by the manager and his staff and it’s very, very clear what everyone has to do on the pitch.

“But for us now, it’s up to us to go and get some results against some good teams and hopefully progress to the Euros.

“I feel that’s one of the most important things we relish as a group of players, to take that responsibility yourself and look forward to some big games.”

McTominay is surrounded by players at Old Trafford who have shone on the international stage, including World Cup winners Paul Pogba and Juan Mata.

“It’s about us as a nation now to really take responsibility and really get some big results as well.”

And McTominay feels showing leadership skills is essential at a club like United.

“I think that’s just part of your character and part of the way you have been brought up through the ranks at your parent club, and taking responsibility,” he said.

“If you are showing leadership qualities then that’s brilliant and you want to take that into Scotland games as well.

“It’s just about having a level mind and getting the best from all your pals around you. And obviously that impacts on yourself as well.

“If you are doing all the right things on and off the pitch it can only put you in a positive light on the pitch as well.”

Friday’s visit of Russia – which will herald the halfway point in the qualifying group – looks like being pivotal.

Both sides have lost to Belgium away but had contrasting fortunes in Kazakhstan, Scotland’s 3-0 defeat looking even worse than it did at the time after the Russians won 4-0 in Astana days later.

When asked if the visit of Russia was a must-win game, McTominay said: “It’s difficult to say but you just have to take each game as a cup final, as a game where it’s vitally important for us to keep building on the progress we have shown under the new gaffer.

“You have to take responsibility on the pitch first and foremost.”