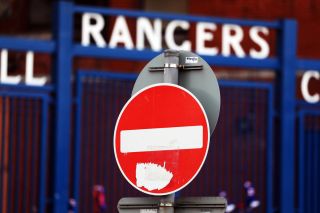 Scottish football has gone into shutdown after the players’ union argued that continuing matches behind closed doors was an “unacceptable” risk.

The Scottish Professional Football League has been suspended “until further notice” along with all non-league and grassroots football.

The move was announced just before midday as SPFL chief executive Neil Doncaster and Scottish Football Association counterpart Ian Maxwell came under pressure to protect fans and players from the spread of coronavirus.

Rangers’ trip to Germany for the second leg of their Europa League last-16 clash with Bayer Leverkusen next week is also off after UEFA called a temporary halt to its club competitions.

And there is doubt over Scotland’s Euro 2020 play-offs after Norway – who Steve Clarke’s side could potentially face in the final – announced they would not be playing their semi with Serbia on March 26.

🎙️ Neil Lennon: “This virus has taken people. It’s taken loved ones. We’ve got players from all around the world, and these players are our priority and have been since this outbreak. We have to put everything sporting aside. Your health is your wealth, at the end of the day.”— Celtic Football Club (@CelticFC) March 13, 2020

In rugby, Scotland’s final Guinness Six Nations match was belatedly called off with thousands of Scottish fans already in Cardiff.

While leagues across Europe have been postponing domestic competitions, it was announced on Thursday night that this weekend’s SPFL fixtures would go ahead, including Celtic’s trip to face Rangers on Sunday.

However, news of a number of high-profile figures in England contracting the disease – including former Rangers midfielder Mikel Arteta – prompted a rethink.

With Inverness becoming the first Scottish club to confirm one of their players had gone into self-isolation after reporting coronavirus-like symptoms, PFA Scotland chief executive Fraser Wishart insists the shutdown is the only “sensible decision”.

He added: “Although this decision will have unknown ramifications for the professional game, the health and safety of everyone involved from supporters to players and other staff at clubs must be protected.

“There had been some suggestions of playing games behind closed doors, but I informed the SPFL of our management committee’s position that if the supporters are not allowed in, our members should not be asked to put their health and safety at risk by playing games behind closed doors. Player safety must be treated the same as that of supporters and the wider population.

“The virus is transmitted via touch and bodily fluids and even behind closed doors players would have been at risk given football is a contact sport and players would come into contact with others sweat.

“This would have been unacceptable, and I am glad the authorities considered this in their decision making.”

The SFA and SPFL stated they would continue to liaise with governments and UEFA. The European governing body is holding a conference call with members on Tuesday where the fate of Euro 2020 is set to be decided.

Maxwell said: “Today’s announcement is made in the interests of public health but, equally, the health and safety of players, match officials, and staff across the game. This is of paramount importance as the country enters the ‘delay’ phase of the coronavirus pandemic.”

Doncaster added: “We have not yet had any confirmed cases of coronavirus amongst players in Scotland, but, given the nature of this outbreak, it seems only a matter of time.

“We realise that many people will be bitterly disappointed, and we would obviously prefer to be in a position where we can continue as normal, but that’s neither realistic nor possible.”

Meanwhile, Scotland will likely have to wait until October to complete their Six Nations campaign. The women’s team had already seen three fixtures postponed after one of their players contracted the virus.

Scotland had trained at the Principality Stadium before the Welsh Rugby Union announced a postponement.

A Scottish Rugby Union spokesperson said: “We support the WRU in the difficult decision they have had to make and will continue to have strong relationship with them going forward.”

The under-20s encounter between the two nations in Colwyn Bay on Friday remained on but the SRU suspended domestic club action until March 29 – a day after Glasgow and Edinburgh’s Guinness PRO14 campaigns were put on hold.

Glasgow Clan, Dundee Stars and Fife Flyers have all been stood down after ice hockey bosses cancelled the remainder of the Elite League season.

However, Glasgow Rocks’ British Basketball League clash at Plymouth Raiders on Friday night was given the go ahead.