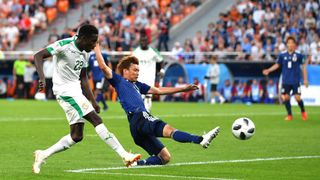 Moussa Wague became the youngest African goalscorer in World Cup history after his strike in Senegal's 2-2 draw against Japan on Sunday.

Right-back Wague, 19 years and 263 days old, drilled into the roof of the net to give Aliou Cisse's side a 2-1 lead in the 71st minute in Ekaterinburg.

He beat the record set by Draman Haminu, who, at 20 years and 82 days old, scored for Ghana against United States in 2006.

However, Senegal were unable to hold to all three points as Keisuke Honda ensured the spoils were shared.

Honda stroked home from close-range just six minutes after coming off the bench to leave the sides level on four points at the top of Group H.

The goal made him the first Japan player to score in three different World Cups and the highest-scoring Asian player in the history of the competition with four goals.