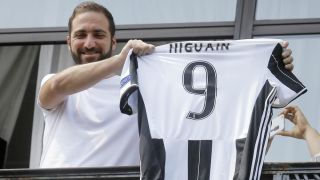 Sven-Goran Eriksson fears Italian champions Juventus are set to continue their domination of Serie A, though the former Lazio boss hopes that is not the case in 2016-17.

There is a genuine concern that Juve have already wrapped up a sixth successive Scudetto without kicking a ball, after luring Gonzalo Higuain from Napoli to Turin in their ruthless pursuit of European glory.

Higuain's €90million transfer follows on from the signing of Miralem Pjanic from Roma, while Dani Alves, Medhi Benatia and Marko Pjaca have also linked up with Massimiliano Allegri.

While Eriksson acknowledged the growing gap between Juve and their rivals, the 68-year-old Swede - who guided Lazio to Serie A success in 2000 - believes it might not be all black and white.

"It might be a one-horse race, like it has been for so many years," Eriksson - now in charge of Chinese Super League juggernaut Shanghai SIPG - said in an interview with Omnisport.

"Juventus are outstanding but I think the Italian league will become better and better.

"You always hope Inter, Milan, the two big clubs in Rome and Napoli they will challenge Juventus for the title. Who knows?"

While Juve are gearing up for yet another Serie A title, Lazio are still licking their wounds after an off-season to forget.

After finishing eighth in the standings last term - seven points adrift of the European places and 37 behind Juve - Lazio brought in renowned Argentine coach Marcelo Bielsa.

However, Bielsa bizarrely pulled out of the deal just days after it was confirmed, with Simone Inzaghi handed the reigns, having initially stepped in following the dismissal of Stefano Pioli in April.

Asked about Bielsa and Lazio's turbulent preparation for the upcoming season, Eriksson - who helped the capital club to seven trophies including the 1999 UEFA Cup Winners' Cup during his four-year tenure - said: "I don't know what happened there, that was very strange.

"But of course my thoughts are with Lazio. I had many happy times there.

"I think if you want be a big team and stay a big team, it costs money. Whether you like it or not, it doesn't matter.

"Without big money you can't stay at the top. Maybe you can reach it for one year but you can't if you don't have money to buy important players."