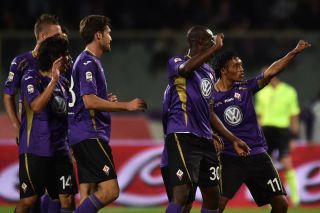 Vincenzo Montella's injury-hit side went into Sunday's clash at Stadio Artemio Franchi with just six points from five games, but two spectacular early goals sent them on their way to a deserved victory.

Inter were looking to produce a response to a humbling 4-1 defeat at home to Cagliari in their last league outing, but Khouma Babacar's unstoppable effort after only seven minutes gave them an uphill struggle.

The hosts - who were without Marko Marin, Mario Gomez and Giuseppe Rossi, among others - doubled their lead 12 minutes later as fit-again Juan Cuadrado tried to better Babacar's effort, netting an exquisite finish of his own.

Inter's record against Fiorentina was excellent going into the game, having lost just one of their previous 16 Serie A meetings.

However, the Milan club never looked like salvaging anything and Nenad Tomovic secured all three points and a first home success of the campaign for Montella's men with 14 minutes to go, increasing the pressure on Inter coach Walter Mazzarri.

Montella had warned his side about a potential backlash following Inter's humiliating defeat by Cagliari.

But the visitors showed no signs of such a threat early on as Fiorentina seized the initiative after just seven minutes, with Babacar blasting a sensational strike into the top-left corner from 25 yards to give them the lead.

Mauro Icardi almost drew Inter level a few moments later when he curled a shot just wide from the edge of the area, and Mazzarri's side were soon made to rue that miss.

With 19 minutes on the clock, Cuadrado – returning from a knee injury – cut in from the left, skipped past one challenge and then bent a fine effort past the helpless Samir Handanovic.

Fiorentina allowed Inter plenty of the ball in the final third as the first half progressed, but the visitors' lack of creativity ensured chances were few and far between.

As Inter continued to chase the match, Fiorentina looked to exploit any weaknesses on the counter-attack and they almost netted a third with nearly half-an-hour gone, as Babacar just failed to make contact with Cuadrado's teasing delivery.

Proceedings were significantly tighter at the start of the second half, before Fiorentina began to exert more pressure in search of another goal.

Their first real chance of the second period came courtesy of the impressive Babacar, who fired just wide from 25 yards in the 59th minute, and the Senegalese forward was involved again a few moments later.

Cuadrado played a clever one-two with Babacar on the edge of the area and, upon receiving possession back, the Colombian beat a couple of challenges before inexplicably poking a shot straight at Handanovic from seven yards.

Inter's attacking threat failed to improve and Fiorentina ultimately put the result beyond them in the 76th minute, as Tomovic surged in from the right side of the area and drilled a low effort past Handanovic, wrapping up a comfortable win.