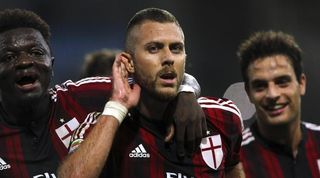 Serie A giants Milan have enjoyed a strong start to life under new coach Filippo Inzaghi, losing just one of their nine league games so far this season - with that defeat coming at home to champions Juventus.

A return of 16 points is enough for Milan to sit fourth in the table, but consecutive 1-1 draws with Fiorentina and Cagliari has seen them fall six points adrift of top two Juve and Roma.

And Menez, who joined the club from Paris Saint-Germain in June, is eager for Milan to rediscover their killer touch against Giuseppe Iachini's struggling Palermo.

"I think the important thing is that we haven't lost a match, apart from the Juve game," the Frenchman told a media conference on Friday.

"We have the right spirit and we have to continue like this. We have to get back on track with a win.

"With the squad we have, it would be a real shame not to qualify for the Champions League.

"If we all pull in the same direction, I think we can achieve that."

Menez made a superb start to his career at San Siro, scoring three times in his first two Serie A appearances.

The 27-year-old has since endured something of a drought in front of goal, though, failing to find the net since his double in the thrilling 5-4 victory at Parma and was benched for the draw at Cagliari in midweek.

However, the Frenchman insists he is not overly concerned by his dry run, and hopes to get back among the goals soon.

"The important thing is to win, then scoring is a secondary," he added.

"We all know that I can do better - I'm trying to find my best physical form. I feel responsibility from the team, I want to get back on form and help the side.

"We're a good team and we must keep working. I'm very happy in Milan - it's a city that everybody likes."

Milan skipper Riccardo Montolivo returned to training on Thursday following the broken leg he suffered in May, but Sunday's game will come too soon for the Italy midfielder.

Palermo, who sit 15th in Serie A, have won just one of their last seven trips to face Milan.

However, Iachini's men will travel to San Siro in buoyant spirits after Luca Rigoni's 81st-minute goal against his former club Chievo gave them a valuable 1-0 victory in midweek.