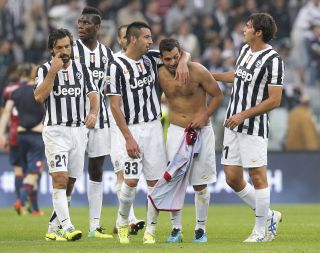 The reigning champions have not tasted defeat against Catania since a 2-1 setback in December 2009, and won both of last season's league fixtures 1-0.

Juve have also lost just once in Serie A this term, and bounced back from their 4-2 defeat at Fiorentina - which they followed up with a 2-1 UEFA Champions League reverse at Real Madrid - with a comfortable 2-0 home success against Genoa on Sunday.

Arturo Vidal and Carlos Tevez got the goals at the Juventus Stadium, and defender Giorgio Chiellini is confident the team can build on their performance after the disappointments of Florence and Madrid.

"We analysed everything over the past few days and saw that certain things could have gone differently," the Italy international said.

"But I can say that I saw the right spark in Madrid and today we once again saw another Juventus - ruthless and aggressive, just as the coach wants.

"We started with the right anger and aggression and swarmed Genoa in the first-half.

"Now we'll be confident in approaching Wednesday's game against Catania."

Forwards Fabio Quagliarella and Mirko Vucinic and defender Stephan Lichtsteiner all remain sidelined with thigh injuries, and are unlikely to return in time to face Luigi De Canio's side.

Catania sit just outside the Serie A relegation zone in 17th position after taking just six points from nine matches so far this campaign.

They have failed to win in their last three league fixtures, including a 0-0 stalemate with fellow strugglers Sassuolo on Sunday.

The Stadio Angelo Massimino outfit are also winless in their last 10 top-flight away games, and are the division's lowest scorers this season having found the net just six times.